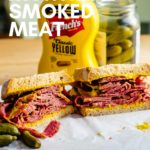 Montreal Smoked Meat sandwiches, smoky and peppery on rye with mustard. Here is how you can make smoked meat in your own kitchen to feed a whole crowd.

This post was originally published in 16, Nov 2016 and has been updated on October 27, 2109, with answers to questions and clearer instructions and updated recipe.

Years ago, during a summer break from university, I managed to snag a dream summer job. I was awarded an internship to work in the Canadian parliament for a cabinet minister. Without boring you with the tiny details, it was quite cool. I was given essentially an all-access pass, meaning you could easily walk around the capitol buildings with relative freedom. That and there were some very cheap staff/MPs cafes, with mostly good food.

However, the best bit was living in Ottawa (Canada’s capital). It is a unique city, with lots of people who are not originally from there. Some very random restaurants, some wonderfully random cuisines. Our office favourite was called La Botega (I may have been the only non-Italian-Canadian in the office), and it was delicious. However, my personal favourite was Nates as they served a Canadian tradition: Montreal Smoked Meat.

Ok, yes, I was not in Montreal but Montreal smoked meat has a nearly cult-like following – particularly in Central and Eastern Canada. It comes courtesy of the large Eastern Jewish population in Montreal (who also make amazing bagels). It is closely related to pastrami, but better. But there are some big differences between Montreal style smoked meat and New York Pastrami.

My family is so in love with this stuff, that when celebrating my wedding a few years back my cousin brought a whole brisket direct from a deli in Montreal. It was probably one of the best evenings, with my entire family sitting on the beach happily eating hot sandwiches. It doesn’t get much better than that.

What type of bread can I use for a smoked meat sandwich?

Deliciously tender and hot smoked beef brisket needs a robust bread, so serve it high on rye bread and some yellow mustard. There are fewer sandwiches that you wouldn’t want to devour.

The biggest item you need for smoked meat is a smoker. If you were to have Schwartz smoked meat in Montreal they only use an electric smoker, because using real wood is banned in the city. Outside of Montreal, you do get the real deal. So, you have two options. You can invest in a top of the line smoker if you are really into smoking food. My uncle swears by Bradley pellet smokers. However, there is a big cost here.

Instead, I’m going to suggest investing much less money into a kitchen-friendly stovetop smoker. I bought one a few years back and it is great, and I’ve used to make so much food. If you want some good ideas, take a look at my maple hot smoked salmon and oak-smoked chicken with mozzarella recipes!

Having always wanted to try making Montreal smoked meat for myself, I gave it a go. The core of this Montreal smoked meat recipe comes from a good post by Josh @MeatWave. However, I’ve changed some of the species and the cooking technique to match my tastes and more importantly the equipment. So if you are using a full-size smoker, double or triple the quantities of everything!

How do you use the stovetop smoker?

This is why I love the stovetop smoker, it is so easy to use. You just need a bit of sawdust dust or mini woodchips (I like the maple or hickory), and then you place a resting drip tray and a wire rack of the top. The heat comes from your stove, and you can either seal up the stovetop smoker with the lid or if it is too big (like my smoked meat brisket), then some foil wrap will do the trick.

What else can I make with smoked meat?

Well, if you are looking for something other than a brilliant sandwich, might I suggest:

Having always wanted to try making Montreal smoked meat for myself, I gave it a go. I will fully admit, the core of the recipe comes from a good post by Josh @MeatWave. However, I’ve changed some of the species and the cooking technique to match my tastes and equipment. So if you are using a full-size smoker, double the quantities of everything!

Now, as I like a good recipe link, I’m adding this to FiestaFriday! Have a look for some other tasty recipes.

You know, people usually have this after a night out, so how about some water. Equally, cold beer will do too! Just have some crispy dill pickles nearby.

I’ve got no good reason to suggest this track, but it was the song that was on the radio the entire summer of my wedding – so much that we refer to it as our wedding song. It’s Shut Up and Dance. Come on, you know you are about to play this song again.

Now, as I like a good recipe link, I’m adding this to FiestaFriday! Have a look for some other tasty recipes.