The past two weeks have been an absolute blur. My chief food taster and I returned from our honey moon/Nova Scotia wedding reception, which was a whirlwind. Two weeks, of sunshine, wineries and some of the freshest food. I happily indulged in proper chowder, digby scallops and as many farmers markets as I could find.

Ah, sometimes I forget just how sublime food fresh from the field or sea is.

Back in the Bedford I wanted to try to hold onto some of that Maritime flavour, so went to make some fish cakes. Those tasty patties; crispy outside with a soft savoury interior, paired with sweet and tangy green tomato chow chow. However, I was vetoed by the Chief Taster as he was a little fished out.

So, walking through the supermarket I saw some shredded ham hock. I had never had ham hocks before coming to the UK, but they are really delicious and this got me thinking. For those unfamiliar, ham hocks are essentially just above the lower hind leg of pigs. They are succulent when slowly roasted/braised, and the flavour is probably one of the best you can get from pork.

The key to any potato cake is to the mix of ingredients minimally, so to ensure the centre is creamy but still has definable potatoes and other bits. I took two baked potatoes, and boiled them until they were ready to be mashed. I rough mashed these with a bit a butter and set aside to cool. I added an egg to some Dijon and whisked it together. Once the potato has cooled I added the ham hock and the egg/mustard mix to the potato.

It is also important to have some flavour. I looked to my garden and grabbed some parsley and tarragon, and quickly chopped this finely and added as well.

Mixing these into some patties, about an inch thick, I chill them for 30min in the fridge. When ready to cook I heat my cast iron pan with some veggie oil, and also turned on the oven to 160c. I take the patties and brush with another beaten egg and dust with bread crumbs. When the oil is hot I place the patties in, and wait until they are crisp on both sides (a good golden brown). I finish them off in the oven and serve’em hot.

Savoury and flavourful, with morsels of ham hock working well with the potato an herbs. Went well with a bit of tarragon mayo. 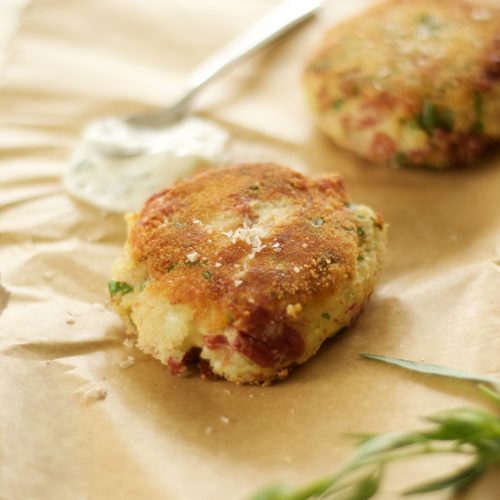