Treat yourself to the true flavour of Berlin street food with this gutsy Berlin currywurst sauce recipe.

This post was originally published way back on November 4, 2016, and has been updated on October 2, 2019 with better writing, some new pictures, and some questions answered.

It’s the start of October, and thus Octoberfest or Oktoberfest! Germany is a great country and one which I love to visit. I also love German (and Austrian) food, with its slow braising, sausages and brilliant baking. During Oktoberfest, even if you have no German ancestors, you too can unapologetically take part in Oktoberfest at home with some amazing German recipes.

Berlin, the capital of Germany, is a great city, and frankly quite cheap as far as capital cities go. It is loaded with history, much of the last century quite violent. It is a story of continual boom and bust. It is also the first place I tried currywurst, from a market stall in Wittenbergplatz. Sure my communication with the stall owner was greatly inhibited by my weak knowledge of the German language (I’m pretty sure he was swearing at me, but still, lovely guy), but it was delicious. As it must be said, are the soft pretzels.

This week’s recipe of Berlin Currywurst is, for me, a lovely example of delicious historical irony. Let me explain. As some readers already know, I’m a teacher. History teacher to be precise, who happens to teach a lot of German history.

Anyway, I was taking a bunch of students to Berlin. I’ve always been somewhat jealous of the opportunities students in Europe have for travelling, and Berlin is a perfect example. If you have never visited, do so now. It is

An overnight trip with students is always stressful, but my students (and my staff members) were brilliant. The trip itself was very emotional and sparked a debate within my students. One student, in particular, queried their puzzlement at the 1930s. ‘Couldn’t people see what they were getting by supporting the Nazis?’

As a teacher, you love this, because it means students are questioning and thinking for themselves. The question itself was a fair question, that historians continue to debate. You can understand the student’s thought process, as Hitler espoused radical views about minorities, rival politicians and the changes taking place in society (Of course no politician would dare do that today………oops). The channelling of the hate to target groups of people, based on people’s belief that they were somehow cheated and disadvantaged. The anger of social change they didn’t like. The anger at politicians, who they blamed for their ills. Hitler came to power by latching on to this discontentment and presenting himself as a ‘superman’ type of figure who alone could solve these ‘problems’ and return Germany to glory. As my students debated; it was scary that such hate attracted such support. You can read more about the history of the time here.

So then, why do I consider Berlin Currywurst an excellent symbol of historical irony? Because it is the antithesis of 1930’s Germany and illustrates everything positive since 1989, served on a plate. You have a traditional grilled German bratwurst(always delicious) and a great ketchup-based sauce (hello American Heinz!). Yet, it’s given a curry twist with some curry powder on top. The mixing of old traditions with the new has created a dish that is, when homemade or bought in a market, delicious. Together they are delicious food, and also something that would never have been tolerated in the 1930s.

Right, History lesson over. In all seriousness, Berlin currywurst is really good. However, should you go to Germany and decide to try it, I must implore you to only buy it from markets. Do not buy from the chain shops selling it, it just isn’t as good!

However, if jumping over to Berlin isn’t an option, then I’ve got you covered! Below is my recipe for a delicious currywurst sauce, so you can make currywurst at home.

Currywurst is German street food, originally developed after the second world war. It consists of a fried sausage topped with a curry and ketchup-based sauce.

Do you use regular ketchup for Currywurst?

If you go into any fast-food joint in Berlin that serves currywurst, you will almost certainly see a sign for Heinz. You could substitute the regular ketchup for low sugar, but it will change the taste profile.

What type of sausage should you use for currywurst?

I would suggest using either a classic bratwurst or a possible a bockwurst. Now, in North America, it is fairly easy to find bratwurst. Bockwurst, perhaps a bit less so. The closest would be a jumbo hotdog.

Can you make currywurst vegan or vegetarian?

Absolutely! Find a vegan or vegetarian hot dog or sausage and give it a try. You would also want to make sure the chicken stock is vegan-friendly.

What equipment do you need to make Currywurst?

Not very much, luckily. Essentially you need a good pot to make the sauce, and a good frying pan to fry the sausages. If you like you could also barbecue the or broil the sausages to cook them.

Some other good German Food (or at least German-inspired!) worth checking out

A great German Pilsner is called for, obviously. Or, my personal favourite is actually from Austria, Stiegl.

Umm, oompah music? Well, maybe not. Instead, how about 99 Luftballons!! 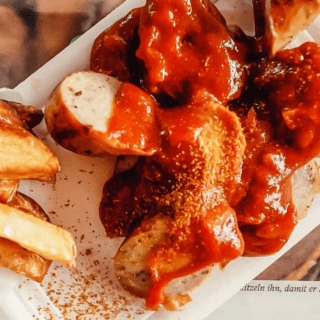