The UK is the home of ready meals, grocery stores are some of the most innovative in the world in pushing this forward. Long gone are the days of simply frozen meals, now the emphasis is on fresh, unique and flavoursome.

The UK also has some of the best shipping and distribution in the world. Next day shipping is very common, or even same day if you are in london. This has allowed for the rise of companies taking a new spin on ready meals, two of the biggest are Gousto and HelloFresh.

Think of them as high end meal kits providers. All your key ingredients, including fresh meat, arrive via courier with recipe cards. You make the meal and take credit for success.

So, which is better? How about a little head to head competition:

Gousto – Gousto allows you to pick the recipes you want, and you pick from 2-4 meals for 2 or 4 people. On the week trialed, the meals were seemed better and more unique, with a great pork tenderloin with butter bean and parsnip mash and a unique chicken stir fry. The real winner recipe was Beet Burgers. Loved these, and have made them since.

HelloFresh (HF) – HF lets you decide between a meat recipe box or a vegetable box, but is a largely set menu. You can chose between 3-5 meals, or go with a family box which feeds four. On the week we tried it the top recipe was the beef and bean burritos. Overall meals seemed a little less adventuresome that Gousto.

The ability to pick your recipes really put Gousto way out ahead here, however even discounting this Gousto’s recipes seem slightly more adventurous than HelloFresh.

HelloFresh – HF is also active on twitter and instagram. Their response to emails was really good. In particular, due to one incident with our box (read below), they responded quickly and very clear on the steps they were taking. 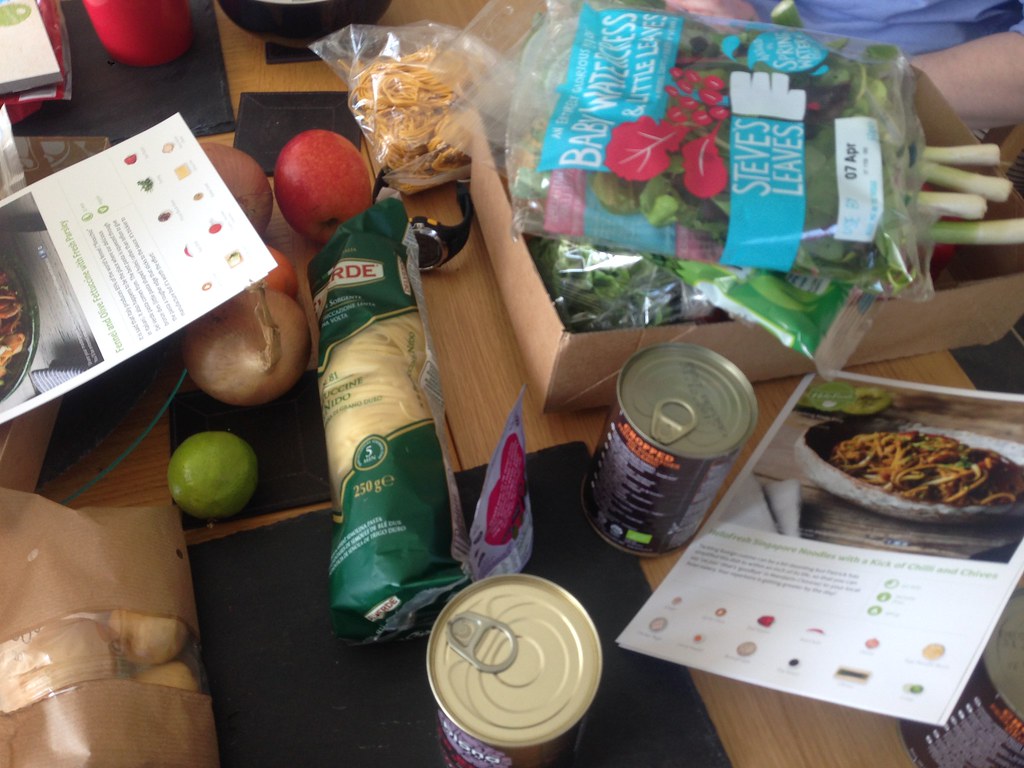 ousto- Given their comments on limiting food waste, it was a bit disappointing that the box came with lots of mini packages. The box came with less branding, which made it feel a bit like much came from the market. Not a bad thing, except this did mean the potatoes which had dirt on them spread their dirt to the rest of the veg. The fresh food was put in a cool wool lined bag. It had four ice packs, both arrived mostly frozen, despite spending park of the day in my neighbor’s living room while it waited for me to return from work.

HelloFresh – It was a VERY polished, everything branded with their logo. Even the meat had customised logos. However, there was less packaging despite us actually going for more meals. Like Gousto, HF used a wool lined bag to insulate the meat. Only two ice packs, which was ⅘ melted by the time we received the box.

-The polished approach also meant there was less waste, it felt more put together.

Gousto – With Gousto the food arrived cool, the pork tenderloin was just lovely, Chicken was tasty, and trimmed well. The vegetables were fresh and crisp and lasted for some time.

HelloFresh – Simply put, this was a let down. Of the meat, only the beef mince was ‘good’. The chicken breasts caused us to be ill. The chicken thighs had to be tossed, when after cooking them it was still clear that they were spoiled well before the date on the package. Just as worryingly, the watercress expired the day the box arrived, and the tomatoes started to mold the following day. As stated above HF did respond to the issue quickly, but it still affected our opinions.

Overall winner in the battle of Gousto vs HelloFresh is: Gousto
The food was more interesting, and was of better quality, leading to a clear win.