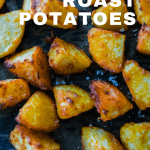 Olive Oil Salt and Pepper Roast Potatoes, the perfect side to any roast dinner. Flavoursome olive oil helps add a new layer of flavour, while ensuring a crispy roast potato.

This post is sponsored by Jamie Oliver’s Jamie’s Italian chain.

Well, now that American Thanksgiving is here we are officially into roast season. It is one of my favourite times of the year, as it is filled with delicious roast dinners. Not just Turkey, but beef, chicken, ham and maybe even some delicious lamb. Supplemented with perfect Olive Oil Salt and Pepper Roast Potatoes.

Here in the UK, there are always tv programmes and chefs saying they have the definitive roast potato recipe. Invariably they all follow a similar trend. First, you need a potato like a Maris Piper or King Edward that go nice and fluffy. Second, you need to par-boil to cook them. Finally, you need a fat. The fat of choice for most chefs is goose fat. Delicious yes, but the saturated fat is off the chart and any vegetarians in your family won’t be able to indulge.

So, in our family we rely on olive oil. You get more flavour than veg oil, and you appease the family vegan (all families has at least one). Perfect! Except, now you have to pick your type of olive oil. Do you go for EVOO (a la Rachel Ray), Light Olive Oil or pure Olive Oil.

This is a big point, because they all have different flavours and smoke points. To highlight this I’ve partnered with Jamie Oliver’s (yes him!) Jamie’s Italian chain of restaurants. They’ve produced a handy infographic which outlines exactly how to choose your olive oil.

It is a great little keeper of a graphic. If you are in the UK and you’ve never tried Jamie’s Italian, you should. Great, really fresh food. That and the olive oil is top notch. Don’t want to visit the restaurant, good news they deliver with DeliverRoo!

Right, now on to the olive oil salt and pepper roast potatoes. You already know the steps, but I add the pepper before roasting and the salt as they are fresh out of the oven. Delicious.

Well, you are likely having this with a roast dinner. So might I suggest a good white wine, a Chardonnay.

Last time we had these olive oil salt and pepper roast potatoes with our roast dinner, we had a good bit of the new Kings of Leon album Walls.