Some Welsh Comfort food, Welsh Rarebit aka fancy beer and cheese on toast. Great on a nice cold day.

Years ago, my sister decided to embrace her creative side in the kitchen. She was about 10 or so, and to be honest I think it was part of her school project. In any case, she decided to research something called ‘Welsh Rarebit’. She made us all hear her presentation and then eat it. It wasn’t brilliant.

Fast forward a few decades, and in Britain, we had a good spat of rainy days. The type of days you don’t really want to leave the house and wish you had a fireplace. You know, comfort food weather. An aptly timed FaceTime chat with my sister reminded me of her ill-fated chicken adventures. So, I decided to have a go at my own version of Welsh Rarebit.

For those who are unfamiliar, Welsh Rarebit is essentially a posh term for Beer Cheese on toast. Yes. Beer and Cheese with carbs. It is delicious.

Truthfully, I’d be surprised if my sister’s version had a beer. If it did, then my parents were far more liberal than I am as a parent!

In any case, I went all out. I bought some delicious extra mature cheddar, some delicious London Pride beer, and some homemade sourdough. After carefully mixing the wet ingredients on the stove, I spread some deliciousness onto some lightly toasted sourdough. Popping it under the broiler on my beautiful new NordicWare pan allowed it to bubble and get a bit crispy. 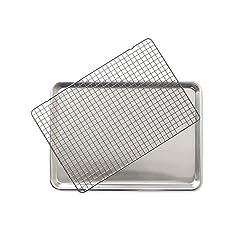 Honestly, I got this pan when ‘D’ had a business trip to the states and I absolutely love it. Handles the heat really well and fits my slipmats perfectly.

Served hot, Welsh Rarebit is a nice bit of comfort on a plate. Plus, you know, you get to have the spare beers. Win-win.

Drinks – Well, the spare beer would do. That or a nice cup of tea.
Music – Umm, not sure on this one. Let’s just say some Welsh singing.